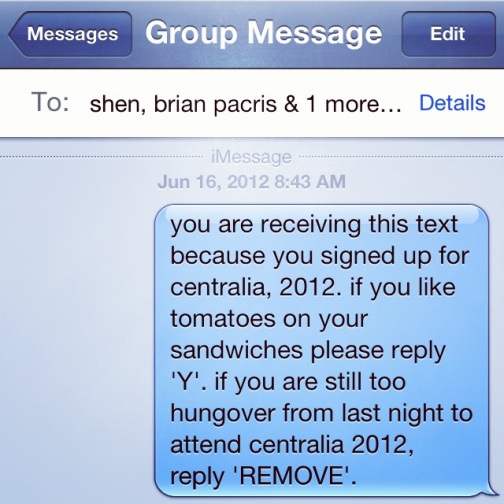 After 6 consecutive months back in New Jersey, I finally made the leap this weekend and got out into some foreign territory: Centralia, motherfucking Pennsylvania.

This brainchild was a bit of an on-the-fly idea. I realized I had a rare entire weekend open and the Magellan in me screamed ‘ADVENTURES!‘ So instead of reaching for my passport I enlisted a solid crew of companions, delicately planned out the snacks I would bring, and picked everyone up at a bright and early 9 o’clock Saturday morning. (Er, it was more something like 9:45, but my crew was hungover, Shen was busy gardening his stoop, and those sandwiches weren’t packing themselves.)

For those who haven’t yet consulted Wikipedia, Centralia is a borough about 3 hours west of NYC that used to be a hotbed for mining. But 1962 somebody messed up REAL big and a coal fire started underground and has been burning ever since – creating danger of sink holes, and forcing residents out of the town by way of eminent domain. The population dwindled from over 1,000 to about 5, creating somewhat of a ghost town that supposedly inspired the movie “Silent Hill.” Road trip? Me thinks so.

So we hit the open highway without much of an agenda at all, leaving our ambitions for this trip to be pretty simple:

1. Get Brian some Wawa
2. I dunno, walk the fuck around?
We’re a pretty lax crew and equally support open minds and Wawa, so without much to expect we set our sights pretty low and just looked forward to a day outside of our urban confines. Mostly I was just psyched that because I have nerdy music friends inevitably one of them brought their iPad and 1,000% DJ’d the trip from the backseat. Yep. Happened.

The Wawa was an easy find (and ain’t it purdy up thurr in thee mountains) but upon arriving at the red dot on my GPS that was to signify we’d reached Centralia, I wasn’t exactly certain what to do next. I openly admit that I really DID spend more time trying to play the role of momma bird and pack snacks for everyone than researching or plotting out Centralia maps. This was also about the time I started spouting out cheesy life quotes for fear I’ve inconvenienced anyone by not knowing exactly where the “cool shit” is. I mean, it’s not like I’ve ever been to Centralia before. GUYS, LIFE IS A JOURNEY, NOT A DESTINATION. Uh duh.

The first place we parked to get out and walk around is near an old gated cemetery. It’s aged, but remains well-kept, kind of like a K-Mart. This cemetery was rad as hell though, because it has the headstone where the oldest man in the world is going to be buried one day. John A. Bowen: 1858 – NOT FUCKING EVEN DEAD YET! I wonder what happened to him?

We walked further down the path to find beautiful mountain views, a small memorial site, and mostly random items in various levels of ruin: pieces of tile, torn stuffed animals, busted computer parts, shot gun shells. We weren’t really looking for the Centralia tourist gift shop, but my God, we found it.

We got back in the car deciding that this was all a cool story bro, but clearly not ‘it’ for Centralia. The old highway is somewhere, we just don’t know where it is. A gray-haired man confirmed “this is where the town used to be” (along with a thumb point to boot) but all we’ve done is walk on rocky trails wearing inadequate footwear which lead us nowhere and seen a few houses that are definitely NOT abandoned. And my honky ass forgot to wear sunscreen. Thank God I packed snacks.

After lunch we were sufficiently covered in dried sweat and had almost exhausted the amount of routes around the area when we noticed a pack of motorcycles (and a crotch rocket) parked in an area we hadn’t traversed yet. What was just around the river bend was the Centralia holy grail: abandoned Route 61. But it’s not just any abandoned highway, it is a long stretch of pavement with the best amateur graffiti I’ve ever seen IN MY LIFE. 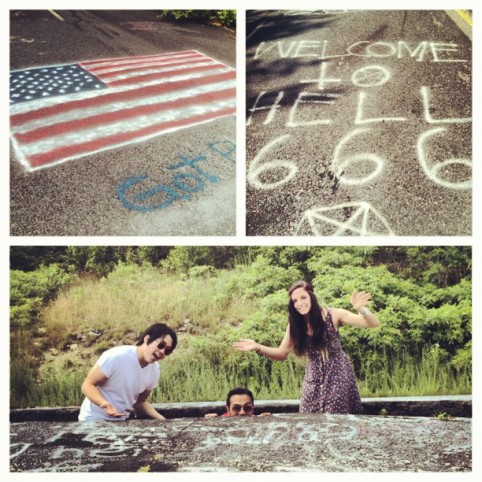 By ‘best’ I do not mean the quality of art of the graffiti was of a high caliber. I mean that anyone who has the sense of humor comparative to that of a 12 year old boy would enjoy walking down this road. Do YOU like dick and fart jokes? If so, RUN, do not walk, to Centralia, PA.

The entire highway is about a mile long and is littered with defacement of all kinds: spray-painted testaments of love (Tim & Christina 4eva <;3<;3<;3) alongside more antagonistic choice words (Matty has a pencil dick) superseded by graffiti of male anatomy of many shapes and sizes (I hope my mother never reads this), and even ill-fated memes (#YOLO y’all!) Even when we thought we found something cute and clean (“Hey, look, it’s Pac-Man!”) a closer investigation revealed that we were wrong. “Hold the phone… Pac-Man is eating dicks!” 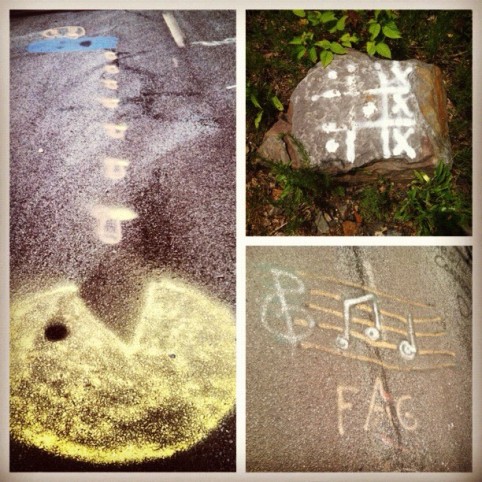 With so many of these stunning graffiti wonders of the world, how can one honestly choose their favorite? I’ll tell you how.

Just when you’ve think you’ve seen it all, just when you assume your threshold for dicks has been reached, what unfolds but a stretch of pavement where some ambitious whip just had to out do everyone. This guy was on a mission. His internal dialogue was presumably something like this: “You know, all those people painting dicks? Ha. Haha. I’ll show THEM who’s boss.” COCKtrailia, PA, you have arrived.

All the previous driving around semi-lost that we did earlier in the day was to no avail though, because after we returned back to the car after walking Route 61, we knew exactly where we were headed. That townie bar back in Ashland? The Drunken Monkey? Oh, we’re going.

Five minutes down the road, we parked and scrambled for change to put into the meter. Shen was the first to come up with a quarter and… oop- oh… one quarter maxes out the meter? Two hours for twenty-five cents! Ashland, you officially have my frugal heart. We stood outside of the front door to the bar and took a breath before walking in. This is going to be so legenda– ….yeah, it was just a bar.

The lady tending the bar was extremely sincere, accommodating, and even had all her teeth. She put music on the jukebox for us, cheerily took the time to run down the draught beer selections (Bud, Miller, and Lager) and pointed us in the direction of all the electrical outlets so we could charge the batteries on our phones that were dying since we’d spent all day instagram’ing photos of Wawa in the middle of the freaking woods. She didn’t just tell us where the outlets were located. This lady was INTO it.

We ordered 4 ‘lagers’ (thanks Alaina for reminding us the locals don’t call it Yuengling) along with two shots of Jameson (some members of the group might have healthy drinking problems. Might.) and the tab came out to $12. What the what? TWELVE dollars? Guys, don’t worry, I got next round.

Having spent a hot day in the sun and with my white-girl sunburn at about a level 5, this lager served in a frosted mug was the most heavenly, euphoric beer experience I may have ever had. I’ve had Yuengling more nights than there are sober kids in Africa, but this beer tasted like it was from God’s lips to… uhm… my own. 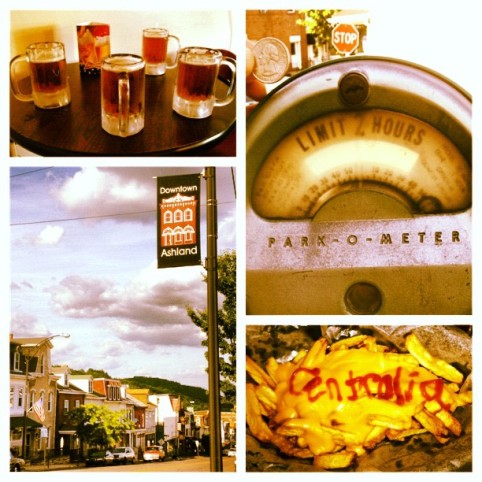 I’m pretty sure the deliriousness on the drive home that followed The Drunken Monkey was mostly conversations peppered with words half-replaced by the word ‘cock’, and even still 3 days later the Centralia group-text is still on fire with cock-centric words. A small dose of history, a large dose of fun.

I can’t fucking wait to review this place on Yelp.